As transmission system operator (TSO), EirGrid is responsible under its licence for planning the long-term ability of the transmission system to meet reasonable demands for the transmission of electricity. Key to planning Ireland’s energy infrastructure is the policy framework aimed at tackling climate change, including the EU’s target of reaching carbon neutrality by 2050, and Ireland’s target of reaching 70% of electricity from renewable sources by 2030. System operators are therefore planning for a future in which significant change is anticipated in terms of generation mix, scale and location, as well as consumer behaviour (including, for example, increasing smart energy consumption through digitisation and increasing opportunities for distribution connected generation). A transmission system that is fit for purpose in a period of rapid change will be critical to meeting this challenge. At its most basic, the system needs to be capable of taking on more renewable energy and meeting increased demand for electricity.

As part of its work to address this challenge, EirGrid carries out scenario planning so that it can assess the performance of the electricity system against a range of potential future scenarios. In its 2019 scenario planning, EirGrid has determined that, on the basis of current energy policy, the following are three credible scenarios over a 20 year time span:

Delayed Transition is described as “a world in which decarbonisation progress is made, but the pace is not sufficient to meet climate objectives”. It involves:

Centralised Energy is described as “a plan-led world in which Ireland achieves a low carbon future”. It involves:

Coordinated Action is described as “a scenario where sustainability is a core part of decision making”. It involves:

In building these scenarios, EirGrid identified the following three factors influencing the future usage of the grid as the key scenario design characteristics. It assessed them both qualitatively (using a PEST(1) analysis ) and quantitatively (by simulating future energy and consumption patterns for each scenario).

An interesting aspect of EirGrid’s latest scenario modelling is how it has developed since the last set of scenarios in 2017. EirGrid maps the three scenarios against their 2017 predecessors as follows: 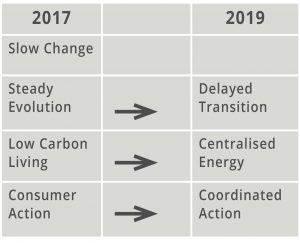 EirGrid indicates that an increased degree of certainty in energy policy in Ireland has led to a reduction in the number of scenarios from four in 2017 to three in 2019. Encouragingly, this has led to ‘Slow Change’ being dropped. The second 2017 scenario also loses its shine, now framed in the more negative light connoted by ‘Delayed Transition’.

Interestingly, ‘Consumer Action’ has become ‘Coordinated Action’. This nomenclature chimes with market thinking that transition to a zero carbon future is only possible with an intensely collaborative and iterative approach to change that sees system operators, regulators, market participants, and consumers work together along with the wider ecosystem (for example capital, data protection, and environment and planning). EirGrid’s scenario planning is reflective of the criticality of long-term infrastructure planning that retains sufficient agility to work with a range of new technologies, in new locations, and at a wider variety of scale and faster pace of development. It is also a reminder that, though the overarching European and domestic policy goal – decarbonisation – is clear, the operational path to that goal has many variables to be decided upon.