Home / About Us / Discover Our Culture / Sustainable Business / Volunteering /
Share

Since 2008, over 200 volunteer trainee solicitors from Arthur Cox have travelled to Zambia on 12 successful trips and raised approximately €650,000 to fund the project’s initiatives. 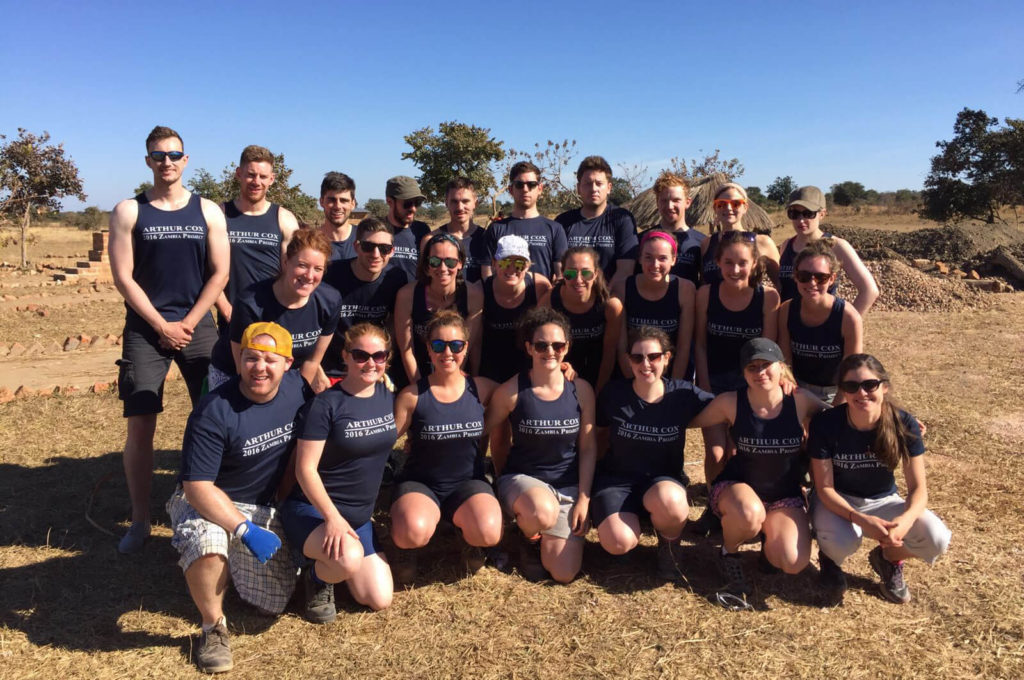 Since 2008, over 200 volunteer trainee solicitors from Arthur Cox have travelled to Zambia on 12 successful trips and raised approximately €650,000 to fund the project’s initiatives. The Arthur Cox Zambia project aims to raise standards of living in some of the most rural regions of Zambia, by developing sustainable health, education and agricultural infrastructure, hand in hand with local communities.
To ensure sustainability and avoid dependence, the project’s initiatives are designed to become self-funding and are conducted within defined timescales with carefully managed handover to community leaders on exit, together with ongoing monitoring of progress. Community decision-making, planning, ownership and handover are key pillars of the project aimed at ensuring its success and sustainability. The inspiration for the project was the firm’s founder, Arthur Cox himself, a philanthropist, who upon finishing his career in law in the 1960s, moved to Zambia to work on the missions.
The project has focused on health and agriculture in rural Zambia, by renovating a rural medical clinic in the village of Masese which provides services to a population of 5,700 people, installing bore hole water supply and running water, as well as building a seven-bed maternity ward. Since 2014, the project has been based in the Chikuni region and has involved the building of six rural radio schools. These schools provide a government approval curriculum to children who cannot attend formal schools due to geographic and financial barriers. There are currently 18 centres with 18 mentors and over 2,700 pupils attending.
In 2015/16 the project launched a programme in partner with schools in the Mwandi region to deliver washable and re-usable sanitary wear for female students, who miss out on up to 6-8 weeks of school every year. The programme has increased school attendances significantly and the project has recently assisted in establishing a small-scale manufacturing facility in the capital, Lusaka. The project has also pioneered a rice growing project in the region to empower farmers reliant on maize to grow rice for the first time.
In May 2019, the Loanja Rice Growers Limited (LRG) was incorporated and it aims to engage 405 farmer households to produce 180 metric tonnes of rice for sale to market. The expected rice harvest from LRG field surveys in 2021 is 54 tonnes, up from 13 tonnes on 2020.

Continuity of the Arthur Cox Zambia project is ensured through the Zambia Leaders from the firm who oversee the project and manage the recruitment and training of new groups that travel to Zambia each year. This group of leaders have all travelled to Zambia themselves and led a group each year, passing on their knowledge and experience from one year to the next. Developing projects in conjunction with the local communities in Zambia is also key to the Arthur Cox Zambia Project’s continued success. All projects are ultimately handed over to the communities. New ideas and developments are always stress tested and researched in association with local experts and implemented within the communities where they are needed.
Due to the COVID-19 pandemic the difficult decision was taken not to travel to Zambia in July 2020 and again in 2021. However despite this, fundraising still continues so the ongoing projects in Zambia can progress.